Why I Chose Online Dating

Why I Chose Online Dating

I’ve heard all the objections to online dating. I’m sure you have, too. They’ve probably stopped you from trying it for yourself.

Let’s look at the numbers. You can see more of the online dating research results at the back of this book. For the moment, focus on these stats. It doesn’t take a math wiz to see that online dating is here to stay. 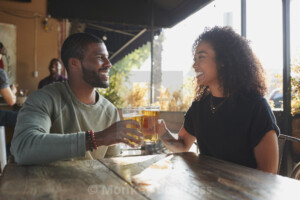 Online dating has grown to become a billion dollar industry. Rates vary by website, but on average, according to StatisticBrain.com, an American will spend $239 a year on online dating. This survey indicates that more than forty million of the fifty-eight million single Americans log on to find love. Americans in their mid-twenties to mid-forties, the largest online dating demographic, have turned to dating sites instead of looking to meet someone at a bar or restaurant, where, according to Match.com, only 9 percent of women and 2 percent of men luck into love.

A study by the National Academy of Sciences suggests online dating has not only changed the way relationships begin, but it has also increased overall marital happiness and longevity. These statistics show that today more than one-third of marriages begin online. The industry has grown in strides since 2005, with almost double the amount of Americans finding a long-lasting relationship on an online dating site, according to Pew Research Center.

Before you race to the computer, let this little tidbit sink in. The world of dating, both online and offline, operates in men’s favor. Match.com’s research indicates that for every eighty-six unmarried men there are one hundred unmarried women, so it’s a competitive game for us. Not that we’re going to let that stop us. It just means you were damn smart to buy this book so you can outsmart all those other chicks.

First, let’s address some objections people have to online dating:

I want to meet someone organically

Hey, I hear you. Here’s how it happens to me in my romantic dreams. I’m sitting in a coffeehouse having a perfect hair day, looking about thirty pounds lighter.   I’m sipping a vanilla latte with whipped cream when a tall, dark, and handsome gentleman walks in the door. Our eyes lock. A sly smile spreads across his face. He’s wearing tight jeans and a tighter t-shirt. His hair is lusciously wavy. He walks over to me and says, “Hi. You have some whipped cream on your lips that looks endearingly silly. I’m going to buy a latte with whipped cream too, and I’ll come sit next to you and get some whipped cream on my lips so you won’t be the only silly one in the room.” I hike up my dropped jaw and watch him saunter up to the counter. We spend the next three hours talking and laughing. Then he asks for my number. He walks me to my car and leans me against the front fender. His strong, calloused hand braces my neck as he kisses the remaining cream off my lips.

This has yet to happen, even though I spend a hell of a lot of time in coffeehouses. Sure, an organic meeting would be the stuff of dreams, but if you’re living in the real world, you’ve probably noticed that strangers have become less inclined to approach each other in person. I’m not saying it doesn’t happen. But I wouldn’t hold my breath.

If you give online dating a shot, you still have the same chance of meeting someone more organically, so what do you have to lose? 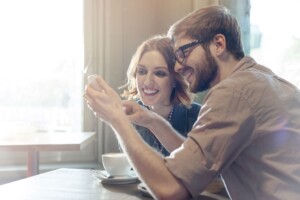 The online dating world is full of freaks

I agree with you on this one, and I’ve got plenty of stories to tell to support your point of view. For instance, my friend Julia met a guy online, and the conversation was going great. Eventually he asked her out. His idea for a first date was quite intriguing. He suggested they go shoe shopping. Julia thought it was a joke and laughed, but he explained his strong desire to see, touch, and smell her feet. She decided even though Cinderella had gotten her man with a shoe; she was going to pass.

My friend Mallory decided to give online dating a shot, and right off the bat she started chatting with an attractive fellow who said he was a doctor. Woo hoo! She googled him, and sure enough, he was a well-known surgeon and a high-profile socialite. He asked Mallory on a first date, offering to pick her up at her house like an old-fashioned gentleman. (You should never let a first date pick you up at your house, but we’ll discuss that later.) Mallory invited him in and offered him a glass of wine (another online dating don’t). When she got back from the kitchen with his glass of wine, Doc was on the couch with his pants down around his knees, and he was stroking something that wasn’t the English bulldog sitting next to him. Mallory’s look of shock sent him packing, and she never saw him again, except in the social section of the newspaper where it was difficult to recognize him with his pants on.

Yes, like Julia, Mallory—and me—you’ll run into some freaks. But here’s the truth. The world in general is full of freaks and dating online gives you a better shot at sifting through them more quickly and easily. You should appreciate the increased efficiency.

There are many sites, and many people on dating sites who are looking for booty calls, but not all the sites or all of the people are all about booty. (Hey that might be your goal here; I’m not one to judge.) Different sites are designed for different types of relationships.

People have certain goals in mind when they date online or offline, and some people are just looking for sex.

Online dating doesn’t change these goals. Online dating just makes the goal more obvious. For example, if you meet a guy in a bar, he probably won’t say right off the bat, “Hey, I just want to bang. I’m not interested in seeing you after tonight,” although that may well be his intention. If you were meeting online, the same guy would likely indicate that he just wants to hang out and isn’t looking for a relationship. This is valuable information that makes your decisions on who to date much more efficient.

Online dating is for losers

I hope this isn’t true because it would mean I’m a loser and don’t know it. I’ve met many successful, brilliant women who do online dating, and I’ve met and dated attractive, wealthy men thanks to online sites. I’ve certainly met some losers dating online, but not nearly as many as you might think. I’ve also met plenty of losers dating offline. I don’t think the ratio is different in the real world, and online dating enables us to sift through the losers and winners more quickly.

I chose online dating because, going into a relationship, I like knowing the goal of the person I may date. Thanks to a busy career and the daughter I’m raising with my ex-husband, I’m limited on time. Most nights, when I have her, I’m at home with her. I’m not out at bars or clubs meeting available men, and I’m pretty sure that men my age aren’t swarming bars either. Like me, they’re probably busy with their careers and home with their kids part of the time. On the nights I don’t have my daughter, I want to be on a date, not searching for someone to date.Times have changed. Technology has entered every area of our lives. Why not use it to change your life for the better?

Eve Mayer
Eve Mayer is an online dating expert who speaks on the topic of women empowerment. After 12 years with the same man, Eve found herself single, ready to mingle and completely clueless on how to date in the digital world.Nine months, 59 dates and 28 men later, she created the roadmap that will help you get the man you want. Eve's book Get It Girl Guide to Online Dating and Sextiquetteis the must have handbook to any woman brave enough to tackle online dating. In December of 2013 during her TEDx talk, she introduced her concept of The Fearless Alter Ego which helps women go after what they want in love and life.Eve now speaks worldwide on online dating and women empowerment. Irreverent, hilarious and blunt, Eve's writing and speaking style will leave you smiling while knowing exactly the next steps you should take to get the life you want!