5 Signs You Should Walk Away From a Relationship

5 Signs You Should Walk Away From a Relationship

It’s so easy to start feeling like something might be off in your relationship, but you find excuses and rationalizations to keep from facing the truth. To make the decision to walk away from a relationship a little easier on you, I’ve come up with some tips on when it just might be over.

5 Signs That You Should Walk Away from a Relationship:

1. You are not his first priority.

I recently was in a relationship where I knew I wasn’t a priority. Work for him came first, renovating his house came second, travelling came third… and then there was me. He struggled with balancing everything. And when it came time to cut something, guess which one it was? Yep, me. I don’t know about you, but that doesn’t make you feel very good, to know so many other things come before you in importance. I decided after that breakup that I would never settle for being anything other but a #1 priority. And guess what? I found a guy who always puts me first. (Well, granted, he told me his mom came before me, but really, can you argue with that?). All the plans he makes, whether it’s a night out with the guys, work-related, or travel-related, I always factor into his plans. And it feels awesome. Don’t settle for anything less than that.

He hasn’t made a commitment to you, but you have to him. What this level of commitment is is irrelevant (whether it’s being exclusive, in a relationship, moving in together). If you’re putting more effort into the relationship than he is, it’s not a good sign. As women, we are givers, and that often means that we get taken advantage of. If you’ve tried talking about the level of effort he is putting in and laid your expectations on the table, and he still is taking advantage, it’s time to walk away. 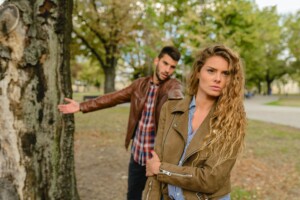 This one ties back into #1 and #2. If the man you’re dating keeps coming up with excuses for not wanting a serious commitment, not wanting to take the next step, not wanting to talk about something, run, RUN away. This guy will do nothing but waste your time as you sit around waiting for whatever his latest excuse is to resolve itself. I hate to tell you, but even if that one excuse is resolved, another one will take it’s place, because the cold hard truth is simply that he’s not ready for a relationship.

4. Your gut is telling you so.

It took me a long time to listen to my gut. But as a woman, you have a woman’s intuition – use it!!! You have it for a reason. And I know from experience, it’s rarely wrong. If something feels off to you, it probably is. It doesn’t matter how many excuses you make or how much you try to rationalize your feelings, you’re feeling that way for a reason. Cut your losses and move on.

A defining factor of a healthy, long-lasting relationship is that you encourage each other to be the best version of yourself. You strive to be a better person. If suddenly you don’t like who you see in the mirror, it’s a solid sign it’s time to walk away. Maybe you’ve become a jealous person, or petty and bitter. Maybe you’ve become stagnant and lazy. Either way, if you aren’t trying to be the best version of yourself, something’s missing.

If you’ve answered yes to any of these, and especially if answered yes to over one,  it might be time to walk away from a relationship. Are there any other signs I’ve missed? I’d love to hear from you in the comment section.

Elli Raine
Elli started off on her blogging journey simply to share the laughs, heartbreak, tears, confusion & craziness of dating. Along the way she discovered the Law of Attraction and consequently Deliberate Attraction, and is a believer in soulmates. Now, the journey is about sharing everything she's learning and empowering women to get everything they've ever wanted along the way.