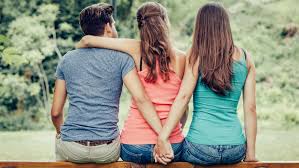 A little while ago I went to a conference called ‘Love in the Time of Tinder’ and some of the seminars I attended really got me thinking. I am going to write about a fairly contentious subject today so please prepare yourself…

It has long been apparent to me that the person we choose to settle down with needs to be someone we know is absolutely right for us. The longer I work in this field, the more apparent it becomes to me that so many people marry the person they are with when it seems like the right time to settle down, rather than feeling wholeheartedly that the person they are with is the one they with whom they should commit their life to. Too often people are settling for mediocre when they should be seeking wonderful.

It’s obvious that a relationship is going to be difficult if it’s not quite right, but from what I learnt at the conference there is even more to contend with than we realise when it comes to committing ourselves to just one person for life.

He explained that part of our identity is strongly influenced by our desires and suggested that our ancestors have influenced what we desire, and that desires are usually acquired via our culture.

He theorised that we have first and second order desires. Our desires are unchosen; we often do not ‘want’ what we desire, and our environment can encourage them.

Second order desires are the things you might want for yourself longer term, sort of ‘big picture’ desires if you like, often driven by external forces.

Sometimes it’s really hard to understand the reasons behind cheating…but it happens all the time!

So for example, let’s say I want to lose weight, because society nowadays dictates that thinner is more attractive and acceptable, and so I want to conform to that. I believe this is what I want.

First order desires, on the other hand, are often more driven by impulse.

So – I might have a second order desire to lose weight, but have a first order desire to eat a piece of cake (because I love cake. It tastes nice, I enjoy it, it makes me feel like I’m having a treat etc.)

In the short term eating the cake makes me feel good. It’s pleasurable while it lasts. It’s not until after I have eaten it that the guilt and remorse creeps in.

It’s as though no matter how much I desire to lose weight and be slimmer in the long term, the temptation to eat that piece of cake sitting right there in front of me is too much to resist in that moment.

Because first order desires are driven by our impulses, they are usually more difficult to resist. We often know that acting upon them would make us feel bad afterwards because we would be going against our second order desires, and those are the ones that are often in our ‘best interests’ but we just can’t help it.

There are people who find that they have a first order desire to experiment with something sexually ‘immoral’. They find that they are aroused by something that society would deem wrong.  In this instance their second order desire would be to be not aroused by that idea. They don’t want this desire – they want to reject it. Society would make them an outcast, they would be disgusted by themselves if they acted upon it, and yet the impulse to do so might be very strong.

In both cases the second order desire is likely to be driven or shaped by what you believe will make you more acceptable in society. Your first order desires are shaped by or driven from somewhere you may not understand.

It is often unclear where our desires come from, as though there is a powerful residual element within us that remains baffling – something hidden or unknown.

Our desires are also shaped by our life events, and it is thought that we can’t ‘undo’ what has been formed within us between the ages of around 5 to 15 years. Therefore the things that we want, or think we want, can be thought of as conditioning, in which we are all unique.

The purpose of exploring this is to look at it in the context of romantic relationships (because, after all, that is my life’s focus!) and to consider how our desires impact our ability to be devoted to someone.

Let’s say we want to remain faithful to our spouse forever. That is our second order desire. Of course we want to be a faithful partner! Not only because we love our spouse, but also because society in the Western world frowns upon extramarital relationships. (It is not the same all over the world as you know, but for us, we are supposed to marry one person and remain devoted to them for as long as we both shall live.)

However we, as human beings, have also evolved to crave novelty: the ‘shiny object syndrome’. This is why we have fashions and trends. You only have to look at the clothes we wear, the things we do in our spare time and the type of food we eat in comparison to 30 years ago, to know that we enjoy experiencing new things.

I think it’s fair to say that many of us are driven to experiment with things such as clothes, hair styles, cosmetics, food, technology, drink, travel, jobs, and relationships – to name but a few. We all want the next shiny new object, which is what Apple capitalise on so wonderfully.

This craving for novelty can make devotion incredibly difficult. It can breed dissatisfaction, both in comparison to what we could have, and in what others seem to have.  It’s that good old The grass is always greener on the other side adage.

It is understood that the hunger for imaginative thought is an active force in our brains. We like to imagine how things might be; could have been and should be etc. Everything we do is a form of distraction from this dissatisfaction and longing for the unobtainable.

Unfortunately, craving for distraction and novelty means that it makes it very difficult to remain devoted to just one person or one thing. In fact it’s probably true to say that we often desire not to desire novelty.

In the long distant past most of us were dead by the age of 35 so we didn’t have the same issues. Human beings were monogamous in order to rear their child. It is most likely that monogamy evolved in order to reduce infanticide because 2 people are better than one when it comes to keeping a child alive (where one person needs to go and get food while the other stays behind to protect against predators).

Let’s face it, in the Stone Age we would find a partner, produce the child, raise it until it was able to look after itself, and then die.  And if we died at around 35, that was it. Job done.

People didn’t stay together for life in the way that we know it now. Yes, they stayed together for life, but life was what is now our ‘middle age’. Nowadays, we live for so long that our life span is now almost two and a half times longer than it was in the past.

I wonder, then, whether that could explain why so many people have a mid-life crisis, or separate from their partners at around age 40 or when the children fly the nest. Because actually they have stayed with their partner for as long as they are naturally programmed to.

Thus, we could conclude that this is the reason many people find it so hard to be monogamous. Perhaps we are not naturally programmed that way.

Being monogamous is a big investment. A relationship often needs to endure for longer than the time it takes to raise just one child. If we have 3 or 4 children and raise them to adult age, we have invested a huge chunk of our life being devoted to our partner and our children.

When our brains were smaller, the primary reason to remain monogamous was because it was necessary for the period of time it took to raise our children. There may have been ‘love’ but it was likely not the same type of love we feel now.

As our brains have increased in size, we have started to invest more in an emotional, physical and spiritual relationship with our partner. The emotional bond that we create with the one we love is often an enduring one. It can endure beyond the craving for novelty, or the natural inclination to dust your hands off and walk away once the child rearing is done.

However, if we do not, we are in danger of succumbing to the natural human impulse to experience novelty.  If we add to that the possibility that we could be pre-programmed to expect a relationship to have a lifespan of around 18 years, yet we are living much longer, we might surmise that it’s no surprise divorce rates are rising and that people are finding themselves in extra marital relationships even though they never considered themselves to be ‘that type of person’.

It is also worth noting that people change a fair amount between the ages of 20 and 40, and what they are looking for in a partner at 20 is often very different from what they want and need at 40. If they and their partner grow and change together, that’s great. However, if they do not, the dissatisfaction and discontent is hard to ignore and they inevitably grow apart.

Considering the number of second and even third marriages that we find in society nowadays, can we conclude that it is perhaps unrealistic to expect people to stay together ‘until death do us part’? Should we simply accept the fact that it is the rare minority that find a partner they want to commit to for 60 years or more, and that the majority of people in today’s society are likely to have at least 2 long term relationships before they die?

All this just makes me feel ever more certain than ever that we must never simply ‘settle’ for the person we are with when we think we are in the right  life stage for having babies or buying a house or whatever it may be if we don’t feel 100% certain that they’re The One. It is so important to choose the right person to begin with, because if you don’t, you could be setting yourself up for heartbreak if the person you should be with comes along later…

I’d really love to know your thoughts on this.

And as usual, if you would like to find out how I can help you find the perfect person for you, head over to www.talktorachael.com and book your FREE 30 minute call and we can have a look at what’s going on for you.

Are you finding your partners infedelity hard to understand? Take a look at @Finding_MrDarcy’s advice for help!