Dating and Trusting Your Gut by @Lolaspeaking 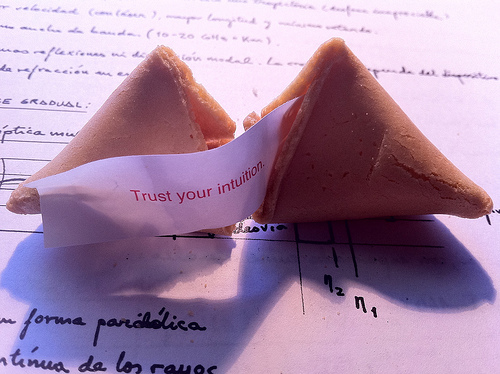 Dating and Trusting Your Gut by @Lolaspeaking

Isn’t it amazing when we have a string of bad dates…to suddenly go on a good one, and all those bad one’s are forgotten? I love that feeling.

I recently experienced that. If you’ve been reading my posts you’d know that I’ve had some less than stellar experiences with online dating.  Then one day, I got an email from someone whose profile I had actually passed by, thinking I wasn’t really his type. It was a very fun moment for me. It seems I was his type, and he wanted to chat with me. Fun! We chatted via email. We talked, endlessly on the phone. We laughed and had fun and texted and talked some more on the phone, and laughed some more.

Then we had a date. And it was just as I had hoped it would be. Not perfect. But perfect. Y’know? He made it very clear he was interested in me. I made it really clear I was interested. I actually spoke the words. He didn’t, but it was clear. We made plans, we had more conversations, we texted some more.

Then a couple of hours before he was coming over, he called to cancel the date. He was pretty cute in how he did. And he promised to make it up to me. We exchanged 3 or 4 text messages through the course of the weekend, and one in particular that I got yesterday that I can only describe one way. It felt like a pre-emptive text message. Letting me know what he was up to all day and wishing me a great day, without actually coming out and saying “don’t bother getting in touch today.”

I wasn’t upset by it. I laughed when I first got it. It wasn’t until later that I realized that mostly, I’m just disappointed.  Y’see…I told people. I actually said the words “So, I think I might’ve met someone…” which is not something I EVER say. I’ve never in my life said that before. But I did. It felt right to share it. It felt good to share it.  Isn’t it funny how we always wish we hadn’t shared it? It’s like when people get pregnant. They wait 3 months before they tell anyone. I think there should be a rule about dating that is similar to that one. It’s like a blow to the ego..and it’s been several years since I’ve even wanted to say anything about a guy…

…and yet, something in my gut keeps telling me that if he were interested, he’d find ways to let me know. If he really wanted to spend time with me, he just would. It would be easy. We’d both want to be together. We just would. I could be wrong, but I don’t think I am. There’s a reason why there are countless books written on the topic…

I could easily give him the benefit of the doubt, which I’ve been doing. I could totally be the bigger person, which I’m known for doing, but there comes a time when you gotta call a spade a spade.  So often, our gut is telling us something and we don’t want to believe it. We want to hold off on the inevitable ego crush. When in truth, it’s already happening. While I type this, my ego is getting beat up. And quite frankly, I’m worth so much more.

He’s a great guy. He just isn’t the right guy for me.

For me to keep entertaining the idea of it…is doing myself – AND MY GUT – a disservice.

Dating and Trusting Your Gut by @Lolaspeaking talks about how important it is to act how you truly feel in your relationship, check it out now Click To TweetWhen it comes to dating, never second guess yourself. [/quote] When it comes to dating, never second guess yourself.  Validate your own feelings.  Know that your friends just want you to be happy and to have it work out for you, so they’ll give you  alternate perspectives, and it may feel like they are invalidating your feelings. They aren’t. They just want for you, what you want for you.

It’s up to you to stop, and really listen…your gut knows.

One of the best gifts that we have (especially women) is our intuition.

PS…just as I was putting the finishing touches on this post, he texted me. I’ll keep you posted.